I heard Dr. Henry Cloud speak last night and he said something I really appreciated:

If you want your life to be different, it’s a good idea to sit down and figure out what you want that different to look like. You need vision.

Such a simple statement, but I think this is something that can easily be forgotten at the beginning of the year when we’re all setting our resolutions. It has to be more than just, “I want to have x accomplished,” it’s about clarifying your ultimate goals and then identifying the small/attainable steps you can make in the short, medium, and long term to get there. To use an example: Losing weight can’t be the goal—that’s a step toward an ultimate goal of something else and you need to be able to identify what that ultimate goal is or you’ll lose motivation.

And so that’s why goal casting is always a really big deal to me. I don’t just randomly make goals and throw them into the air hoping something sticks. I’m purposeful about what I want, what I need, and realistically what I can accomplish in a given set of time. So that being said, I have 7 goals this year:

Things that aren’t goals, but are lifestyle changes I would like to see happen include becoming more disciplined about my writing time and drinking more water.

Things that I am putting into the universe that I would LOVE to have happen (but of which I have no control): selling a manuscript (or more!) and getting a promotion at work.

Well in 2016, I only did 3—but I’m still pretty dang proud of myself considering how busy this year was.

For 2017, I’m going to still plan on doing 4, but I want one of those to be with a group of a writing friends, not just by myself.

So here’s hoping for lots of writing time in that cabin in the woods.

Oh y’all, I can’t even begin to tell you how proud I am of Meghan and Tracie and all their relentless hard work! Because… was it worth it? YES!

Within a week of Pitch Wars, Meghan and Tracie had received offers (emphasis on the plural) of representation!

Congrats to Meghan Jashinsky who is now represented by Jessica Watterson at Sandra Dijkstra Literary Agency!

And congrats to Tracie Martin who is now represented by Lauren Spieller at Triada US!

Lynnette and I had such a fun time finding these ladies in the Pitch Wars slush and working to help make their manuscripts shine! It’s an incredible honor to know I played a small part in helping them get to the next milestone in what I know will be very long and successful careers.

I am so thrilled to introduce you guys to our two amazing mentees!

Princess Skylla is a nightmare from which her kingdom will never wake. She’ll use their bones to clean her teeth and wear their intestines like ribbons. It’s the least they deserve after what they did to her family the night of the Slaughter.

But the rebel leader Ariadne and her people refuse to continue living in fear. They must overthrow the princess, and this time, they’ll get it right.

It’s THE PRINCE AND THE PAUPER meets THE YOUNG ELITES.

That imbecile got blood on my crown.

I should have Ero’s fingers cut off for this. He’s worked for me long enough to know the consequences. Still, it’d be a shame to disfigure a body that impressive. Besides, this isn’t one of his usual responsibilities. I’ll give him one last chance.

“I’m sorry, your Majesty.” He casts his dark eyes to the blood-stained floors.

He stumbles to the back of my train and gives me a look mingled with terror and awe. It sends a thrill down my spine. Days away from turning sixteen, the orphan princess has managed to strike fear into her own Captain of the Guard.

They cower in my presence. I love it.

I grin at my reflection, my teeth brilliant behind my black silken veil. Ero dips a syringe into one of the many buckets stationed around my dressing room, sucking up the thick blood.

And Tracie V. Martin’s THEN BEGGARS WOULD RIDE

Title: Then Beggars Would Ride

Everyone believes Gwen’s boyfriend is a cult leader. After disappearing without a word, he’s resurfaced as the Beggar with a goal to spread “The Message” far and wide. Not willing to lose him, Gwen hits the road to bring him home. But as she and his ragtag disciples trail in the Beggar’s wake, Gwen discovers his mission is much more sinister than just preaching.

Told as a prison confessional, it’s THE WALLS AROUND US meets THE DEVIL AND THE BLUEBIRD.

First, you’re going to ask how we met. Everyone does. It’s not even the stupidest question people ask. That’s “How did you shave?” Once, I would have fucked with you, pretended that I cared if hair bloomed out of my armpits while I tracked my boyfriend from coast to coast as he meandered his way to hell. But now, I’ve watched people drown and I’ve broken a good man’s heart. I’ve killed someone. It’s no pleasure anymore to waste the few words I have left.

What you really want to know is how a good girl like me could fall for a killer. You’re looking for specific beats in our origin story: he bewitched everyone with his charm, but in hindsight you could see the dark spots. I get this question most often from those with a strong belief that all people have souls, and by ‘souls’ I mean unchangeable cores of either good or evil. I get it. It’d be nice to think that Saul was born black-hearted.

Click on the links above to access the original posting on the #PitchWars site (and see if they’re getting any agent love- pssst, they are!). I’m so ridiculously proud of these ladies and all the work they put into their manuscripts. We asked a lot from them and they TOTALLY delivered. Any agent would be ridiculously lucky to represent them!

Crossing ALL THE THINGS for lots of requests!

I’ve spent the last two months doing more deep editing than I ever thought possible… and it wasn’t even for my own books (well, I did complete a revision on my book, but that’s beside the point).

I grew as a writer myself as I learned to recognize things in other people’s writing that could be tightened and improved. It was a lot of work, but a ton of fun!

I also have a WHOLE new respect for agents and editors as they acquire manuscripts. I have read each of my mentees’ books 3-4 times over the last two months. My own agent has read 5 different drafts of one of my books. You have to LOVE a manuscript like something fierce to be able to read it that many times without having your eyeballs begin to bleed. That’s why they’re so picky about what they acquire.

But all this editing got me thinking about the role of an editor. Not an editor at a publisher, mind you, but someone you’re either paying or asking to help you take your manuscript to the next level.

An editor’s role isn’t to get the author to write the story the editor would write.

An editor is there to guide you, not write through you.

I can give ideas for plot fixes, I can say, “hmm, I’m not sure this character would react like this,” but in the end, the writer is who knows the story best. The writer is the one who crafts the voice in a piece of dialogue. They are the one that hides the red herrings and the one that crafts the big reveal. You suggest, they implement (and FYI, suggesting is WAY easier than implementing — so no matter how hard you work as an editor, the writer works twice as hard to execute your notes.)

If I, as an editor, try too hard to push my view of the manuscript, I’m going to end up breaking the book.

I also need to be careful because my opinion is weighted heavily and I don’t want my mentees to make decisions they don’t feel comfortable with because they don’t want to tell me no. It’s a fine balancing act of confidence and respect.

I am lucky enough to have an agent who is extremely editorial, yet extremely respectful of my role as the author. Her insight and editing has been invaluable, but her support of my story is what makes it work between us.

So the moral of the story is editors are SO important, but they should always be there to help you improve the story, not write through you. 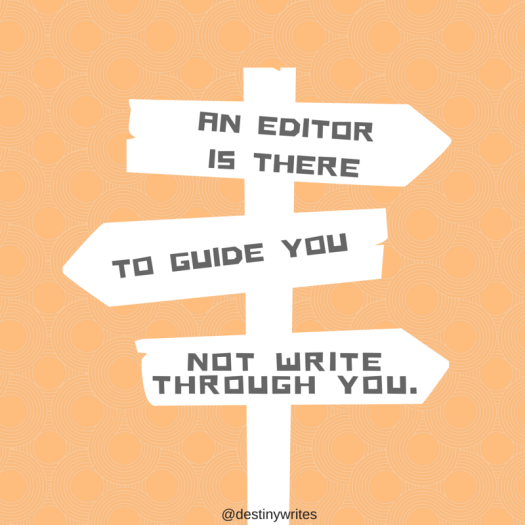